It surprised me, really, as I drove along… memories kept cropping up all across the PNW. Upon reflection, I guess it makes sense; I’ve lived in an awful lot of places throughout that whole area & have traveled quite a bit throughout it, too. My 2nd day on the road started at the truck stop in Mountain Home, ID. I woke up early on Tuesday because I wanted to make it all the way to Yakima & felt like it was too far to drive just in the evening. After staying up working to get this blog set up until 2:30am that morning, I proceeded to then wake up at 5:30am & start driving. Just a little bit excited, obviously!

As I drove by the National Guard base in Mountain Home, I suddenly remembered a time I had visited there with Rich, the worst boyfriend of my life! Yuck, thinking of him was not the best way to start a morning with my eyes still blurred from lack of sleep. Although then I also remembered that if I hadn’t of dated him, I never would have moved to Idaho in the first place. And, after him, Idaho was actually a pretty good time in my life. And so, I thought instead about the last time he went to that base for his 2 week duty. I pack all his stuff into boxes & told him as soon as he got home that he had to move out. Maybe it wasn’t the most eloquent way to handle the situation, but I was young & at least I got myself out.

The Center for Birds of Prey in Boise caught my eye. I remember visiting there with my dear mentor, Kay. She was the interim hospital administrator during my last year in Council. She was the first person in my professional life that really believed in me & saw me for my potential. She was also super supportive in helping me through leaving Jason, my 1st husband. She lived in Boise, but during her year as the administrator, she had an apartment in Council as well. About 6 months after I had met her she invited me down one weekend to her home in to Boise. Looking back, she was probably trying to help me remember life outside of Council. I’m sure she saw at that time that I needed to move on with my life. We had such a fun weekend together. We went to the Center for Birds of Prey, out to a really nice restaurant for dinner, & then to the alternative movie theater. Such a nice change from small town living. Mostly what I remember about that weekend is her just sharing… about her life, all the struggles she had been through and different paths she had taken. She hadn’t had an easy time of it, yet she did it. She was so successful and so smart. She was a huge inspiration to me that I didn’t just have to stay stuck in a bad marriage in a small cow town. I could go do whatever I set my mind to. We discussed it and she advised me that in order to really be able to get to where I wanted to be I was going to have to return to college & finish my degree. Looking back now, I’m eternally grateful for her advice.

Further down I-80 are signs to Hwy 95 – lots of memories up that highway. Council is up there, about half way between Weiser & McCall. I lived there for 5 years. One of it with Rich and the other four were spent dating & married to Jason, a cattle rancher. Bits & pieces of my time with Jason flashed through my mind. There were lots of good fun times with him – riding for cows, calving season, brandings, BBQ’s, and crazy times at Wilson’s Lounge. He really was a good guy overall, its just a shame what alcohol can do. It was an interesting learning experience for me as I had never really been around alcoholism before & didn’t know anything about it. Needless to say, I learned that I don’t want alcoholism in my relationship.

I was excited to see the Snake River at Farewell Bend. My mom, dad & I stopped there on our way home from visiting Treasure Valley Community College in Ontario, OR. I contemplated attending there to get my 2-year degree in Horse Training. Now that would have resulted in a quite different life, wouldn’t it?! Anyway, we stopped there. It was a huge thriving truck stop & several motels. The diner we ate in had bison burgers; it was the first time I had ever eaten bison. And so now, I’m driving along, craving a bison burger. Not really thinking about the fact that the last time I had eaten there was a little over 20 years ago! I come around the corner & see… boarded up emptiness! I couldn’t believe it. Gone were my dreams of having a bison burger that day, as well as the dreams of all those people who owned those small businesses or worked there. Wow. Even when I lived in Council the truck stop was alive & well. Then I realized how the last downturn in the economy really had hit small businesses in the small towns. Tragic.

Each spring when I lived in Council, Jason & I with a bunch of friends would get in our pickups & head down the grade from Bear, ID to the Snake River in search of the 1st buttercups of the spring. It was always such a fun trip! That grade road was exceptionally scary – one lane with few turn outs. It worked pretty well except when another rig was coming up the grade! Some springs you could find buttercups higher up on the hillside, others, we’d find the 1st all the way down in the canyon depending on what kind of spring it was. Its kind of funny; a lot of people don’t know about Hells Canyon. It is the deepest river gorge in North America & is about 10 miles across. Its pretty spectacular in its own way, of course not nearly dramatic as the cliffs of the Grand Canyon, but impressive none the less. One time my sister Beth went on a rafting trip down through Hells Canyon. We went over & visited her on the night she was camped by Oxbow Dam. It was such a fun evening seeing her in “my neck of the woods!”

I finally stopped driving that morning around 8am at a rest stop by Huntington, OR. I stepped out of Sofia & smelled the air – it was permeated by sage brush! Oh, I love the smell of wild sage brush; smelling it was always one of my favorite parts about riding for cows. I savored the moment for a bit, then climbed in & sat down ready to start my work day. I turned on my wifi without a problem, started working, & left the memories behind… just like that! (For then!) At lunch time I decided to continue on my journey rather than hanging out at the rest stop & drove to a rest stop just east of La Grande, OR. I was so happy to be driving through that area. The area between Baker City & Pendleton I think is one of the most beautiful places in the world. I love Blue Mountains & the Wallowa’s, all the trees & the lush meadows. I’ve always somewhere up there would be the most perfect spot for a cabin.

After work I got out of Sofia to do my walk around to make sure everything is secure before getting back on the road. There was an elderly gentleman on a motorcycle parked right next to me. “Where ya headed?” he asks. “I’m going to Yakima tonight”. The sky is has some pretty crazy thunderclouds around & the wind has picked up significantly. “Do you think its raining up there?” he asks. “I think its fairly likely”. And so, I hit the road & head up the Blues. 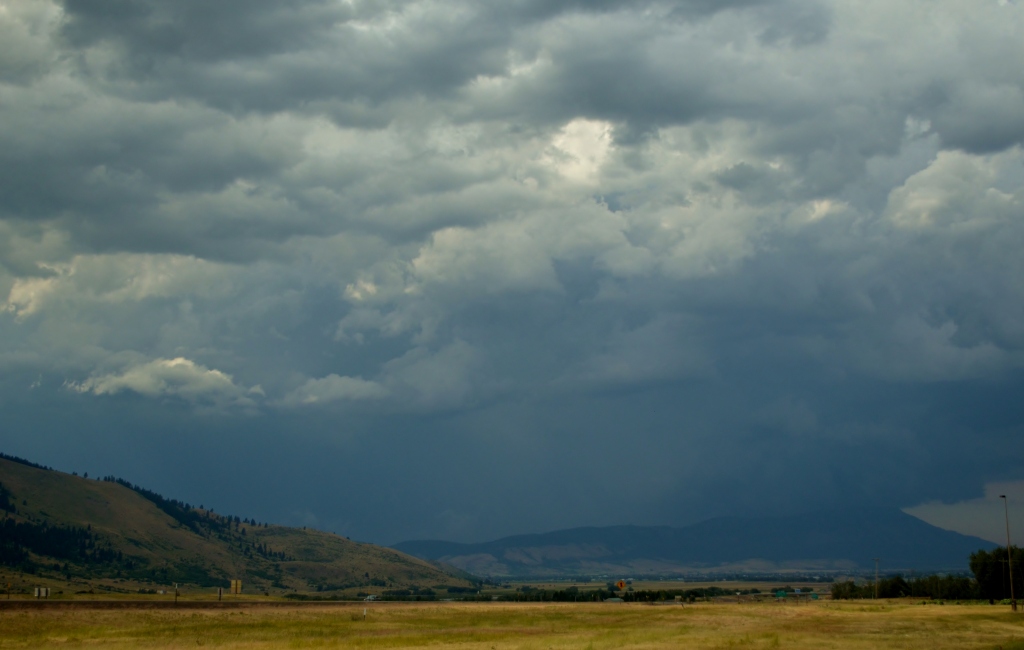 Sure enough… not only was it raining up there, but my goodness! A crazy thunderstorm, complete with lightening, high winds & buckets of rain! It is an interesting predicament to be in driving up a windy canyon in a big RV in those conditions! I was happy once I passed the summit that I left that storm behind. Whew! I had weathered my first storm! Felt great – I am gaining confidence!