The drive south from Moab was such a beautiful one. After the red rocks just outside of Moab, there were the Abajo Mountains outside of Monticello & Blanding. Beyond that I could begin to see Monument Valley in the distance. Even from a distance, it just looked so awing and got even more so the closer I got to the area.

There is one RV Park in the valley, Gouldings Resort, inclusive of a lodge, restaurant, campground, mini-mart, & gas station. Monument Valley is on tribal land, so you can’t just park & camp wherever.  Gouldings Resort is situated right beneath towering red cliffs with spectacular views of Monument Valley. My mom had arrived just before I did & found me just as I got there. We checked in quickly & left Sofia, using mom’s rig as we figured it would be easier to get around. The Gouldings resort has a small little museum. The Gouldings were some of the original settlers in the area who established a trading post to trade with the natives. Later, during the Great Depression, they were instrumental in getting the movie industry started in the valley, which definitely helped the economics of the area. The museum has quite an extensive photo collection of all the movies filmed in the area, as well as some native art, rugs, baskets, etc. Also, their living quarters which were above the trading post were open for viewing. Pretty cool to see. Obviously John Wayne is a pretty big deal in these parts. His “cabin”, I think from a movie set, is located right behind Gouldings trading post which has his picture painted on the side of the building. Not much to see there, but it was kind of fun to be in the same place as John Wayne was.

Mom & I had decided the best way to view the sites of Monument Valley was a guided tour. As mentioned, the land is tribal land & they don’t like randoms driving all over the place. There is a “17-mile drive” through the valley that anyone can drive on, but based on internet research, the true gems were on the guided tours. The tour through Gouldings that I wanted to go on didn’t start until April. So, I looked around the internets & found a website for Kéyah Hózhóní, Monument Valley Tours (I highly recommend calling them if you’re headed to Monument Valley!). I was drawn to the photos on their site & after sharing it with mom, we booked a tour.

We met our tour guide, Ray, at 3:30 after touring the Visitors Center at the Navajo Tribal Park. Just the views from the visitor’s center were amazing, but we were ready for more! As things ended up, Ray, couldn’t have been a more perfect guide! As he drove us around, he told us stories of his grandmother, the current medicine woman for the Navajo Nation. He told us of a documentary she & he are in; mom & I both made notes to watch it sometime. Its called “We shall Remain – the Navajo”. He showed us where Andrew Zimmern & Bizarre Foods filmed the segment featuring the Navajo Nation. That was super cool, because I remember watching that episode! He explained the differences between a male & female Hogan. The only difference is the shape & way its built. Both males & females & kids for that matter can live in either a male or female Hogan. All hogan’s have the door facing east, so they can welcome the sun each day.

And, to top it all off, Ray often guides photographers. So, at each stop, he’d show me (sometimes it was quite a hike!) where all the photographers go to get “the” shot & when the best time of day & year it was to get the best shots of each feature. I even opened up the Monument Valley souvenir book I bought & the first picture was one exactly the same location & angle that Ray directed me to take. I love it! How fascinating to listen to his stories both of the natives as well as all the photographers he’s guided. He really was such a charming host for us through the backcountry of Monument Valley.

Here are some of the pictures from our tour with Ray… 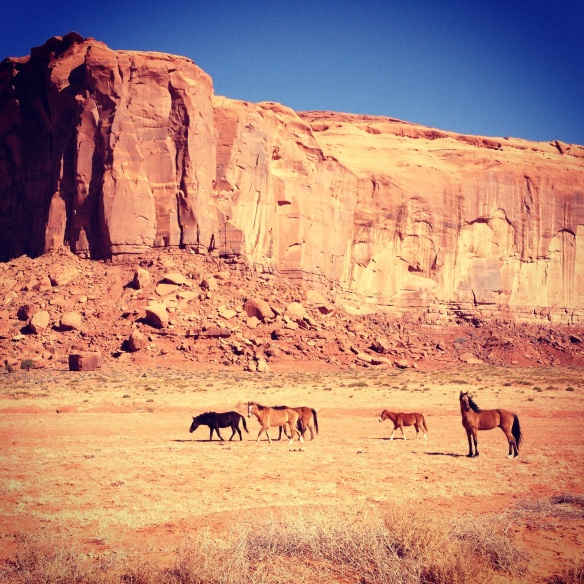 Wild horses – I love that the stallion just stood there & posed for the picture.

Eye of the Sun Arch

Ear of the Wind Arch 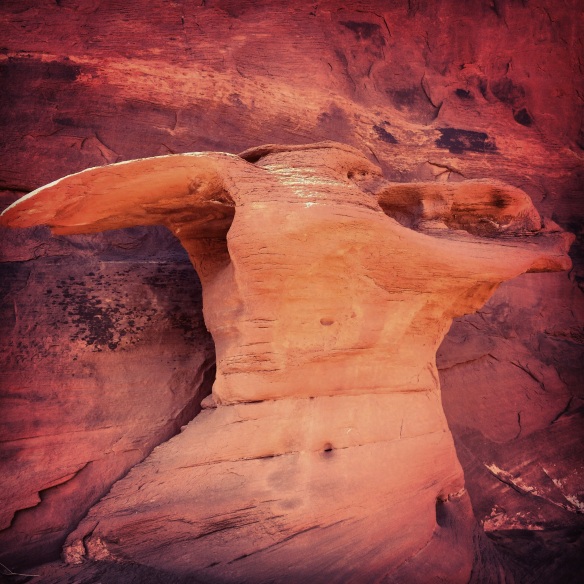 Big Hogan Arch – super cool cave arch that was round with the opening in the very top middle. Super cool!

Yei Bi Chei (The Dancers), The Totem, Tumbleweed, & Ripples in the Sand

By the end of our tour, we were just in awe of the breathtaking landscapes we had seen. What a magical place indeed…

We were also very hungry. We went to Gouldings Lodge (recommended by Ray) for dinner and had the best stew & fry bread ever! I had Pork Green Chile Stew & mom had Beef Stew. Excellent southwestern cuisine!

Returning to Sofia, I remembered that I needed to deal with installing the battery in Zeta so it could charge overnight, as I wanted to take her for a ride through Valley of the Gods after mom left the next day. Now, I have NEVER worked on any type of vehicle doing anything ever. Installing a battery might not seem like a big thing, but it was a little daunting to me. Especially beings that the battery wasn’t the exact duplicate of the one that was previously in there. This new one was shorter & wider than the original. Thankfully, I was able to somehow wiggle it in the allowable space, all the while keeping track of the wires. I connected it all & just like that! I had done it! I connected the battery charger & figured I deserved a nice glass of wine after that!

Although then once I got back in Sofia, mom mentioned that the carpet was all wet in the bedroom closest to the bathroom. That damn leak; the one the repair guy couldn’t find! A thorough investigation showed that the leak was coming from the water lines leading to the toilet. I tried tightening them to no avail thinking they might just be loose. I was like, really?! More problems on this trip already? I got a towel & soaked up the water all around. Mom found a cup that we placed under the leak. The problem was the cup was filling up full in like 20 minutes! I tried researching the internets for a solution, but then turned to the owner’s manual. It appears as though I didn’t winterize the toilet correctly & resulted in cracking the water valve. Only solution is replacement. Ug. What was I going to do for 9 more days leaking this much water? Mom, the ingenious person that she is, suggested turning off the water to the toilet. There isn’t exactly a turn-off knob like in a home bathroom, but then I remembered the water pump! Turning that off, helped slow the drip tremendously. Short-term solution; yes! Pretty easy to leave the water pump off except for briefly when needed. Ah, yes; always good to find those creative solutions for random things that happen on an adventure.

All the upkeep items aside, mom & I could finally relax & enjoy the rest of our evening together. A couple glasses of wine & looking at all the fun pictures we took earlier in the day – the perfect mom & daughter time for us!