Waking, I knew today was going to be a much better day! My day started by taking Geb out for a walk. I hadn’t gotten to take him for a walk the evening before because it was totally dark by the time we finally made it to the RV Park. He reminded me right away that I had promised him the night before that I’d take him in the morning. It was such a nice relaxing way to start the day. There was a sagebrush & juniper field just beyond the RV Park that we walked through. I just love watching him explore. Then, when I got cold I told him it was time to go home & he just turned around & took us back to Sofia. Wow! He had done that a couple days earlier when we walked at Nizhoni campground & then this morning too. Really, at the risk of sounding like a crazy cat lady… I believe he really does understand what I say!

After our walk I used lots of soap & hot water & cleaned up all the olive oil & soy sauce mess from the day before. You know, I don’t really like staying in RV Parks – I’d much rather stay in the middle of nowhere by myself – but I have come to realize while owning Sofia that RV Parks really do have a place. They’re super convenient. They have water, power, sewer, showers (Sofia only has an 8 gallon hot water heater), laundry facilities, and often even propane. Sometimes its nice to quit “roughing” it & use the amenities. Its certainly easier to clean up a mess having unlimited water rather than worrying about running out.

Work went well that morning; I got quite a bit done which always feels great. I was to check-out of the RV Park by noon, so my plan was to take my “lunch break” exploring Edge of the Cedars State Park & work the rest of the afternoon in their parking lot.

Edge of the Cedars is actually a really cool little museum. It has some Azasazi ruins outside, built from AD 825 – 1125. You can climb down a ladder & go into the kiva (ceremonial space). I found it interesting that they chose to build on this small hill. It was a great view with the mountains in the background & the valley down below. Pretty much the same view I had the previous day as I was working. 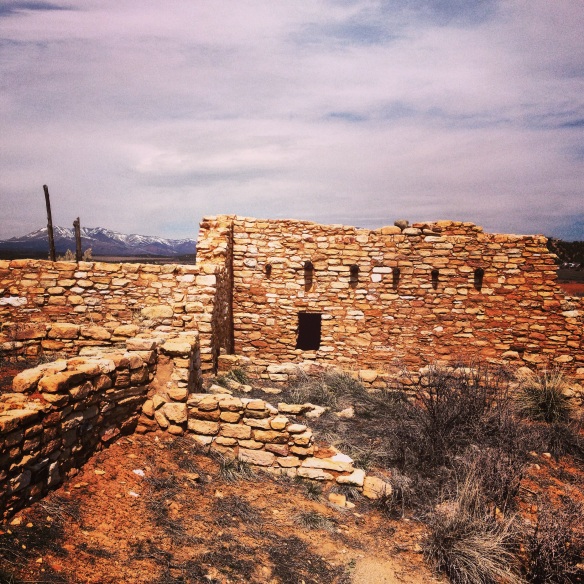 Ruins at Edge of the Cedars State Park

But the really fascinating thing there to me was their museum. They have the largest collection of Ancestral Puebloan pottery on display in the Four Corners area, as well as all kinds of artifacts – aprons from yucca fiber, turkey feather blankets (who knew they made turkey feather blankets!), sandals, arrowheads, digging sticks, etc. Such old cool stuff! And, they had all these informational signs about all the different ruins in the area and the stories of those who had discovered them.

It was fascinating… especially for someone who has ALWAYS dreamed of finding just ONE arrowhead (I never have been that lucky!). I can only imagine stumbling upon an entire ruin that no one has previously ever cataloged. I was blow away with really how many sites there were – all over the area! I guess I just had never thought about it before, but really there were ancients all over this area; not just at a well-known place like Mesa Verde. Perhaps that’s showing my ignorance, but I was happy to learn an overview of so many local sites. While I was there, I saw an informational board on Hovenweep. I was instantly drawn to it & knew that was the next place I was going.

I finished up work & conference calls that afternoon. I couldn’t wait to get on the road & drive toward Hovenweep! Even just the name seemed magical to me in a tragic sort of way…

Even though I had seen a brief informational sign about Hovenweep, I didn’t really know what to expect. Again, arriving late in the day, there were only 2 cars in the parking lot other than Sofia & the visitor’s center was closed. I found a trail that pointed toward ruins & walked out. I arrived at a smallish (comparatively) canyon cut in the middle of the Cajon Mesa & saw not only one tower, but a lot of them! Oh, how fascinating!

There are towers on top of huge boulders, on the sides of cliffs, under overhanging rocks, & at the canyon bottom all made out of stone. There were little windows & doors even! Its difficult to get multiple ruins in one picture as they’re spaced out all along the canyon.

Some of the towers at Hovenweep

They’ve determined that the village was constructed during the thirteenth century. Towers here are D-shaped, round, square, rectangular or the shape of the boulder top upon which they were constructed.

Tower on top of a boulder, Hovenweep National Monument

Researchers have even discovered that the windows & door locations in the Hovenweep Castle create a solar calendar indicating the dates of summer & winter solstices and the spring & fall equinox sunset. Amazing. 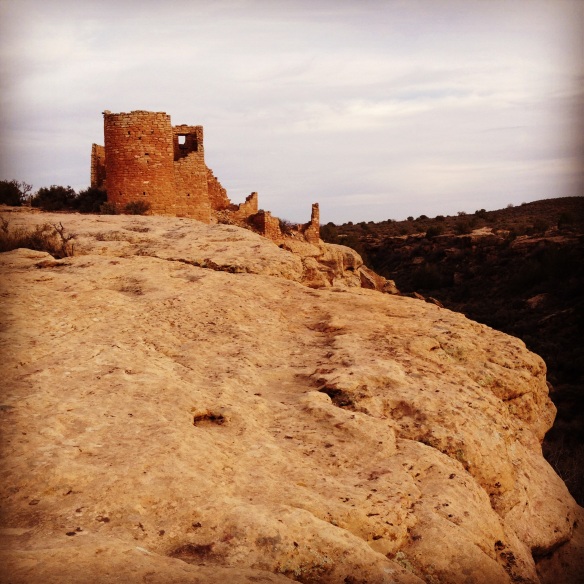 Hovenweep is a Paiute and Ute word that means deserted valley. This place was given that name by a pioneer photographer, William H. Jackson in 1874. In 1923 it was established as a National Monument. It is what archeologists consider to be the finest examples of ancestral Puebloan masonry found anywhere. It was once a vibrant community of hundreds.

I could just feel the presence of the ancient people here. It felt like a reverent place to me. I wandered all around, all alone in this amazing place. Such history!! I sat on a rock ledge at the top of the canyon. I can only imagine what it would have been like 1,000 years ago. There were people living there who were probably not that much different that we are today. People, who laughed & smiled. Who had hardships & difficulties. Who loved & lived. Of course, their hardships were different than ours today, but the fundamentals I’m sure are similar.

As I sat looking down at the relics of this ancient community, there were two ravens circling above back & forth, up and down, the canyon. I bet they too could tell this is a special place…

The canyon is “Y” shaped. The tops of the canyons just abruptly start; cliff-faces down to the canyon below. Not terribly high, but strangely abrupt. I bet it would be amazing during a rain storm or flash flood to see the water from the mesa cascading down the cliff to the canyon below.

There is a spring at the top of the left canyon. There are trees growing up gracefully. I realized that those trees obviously weren’t there 1,000 years ago, but I bet other trees were. How lovely it would have been to relax in the hot summer day down in the shade of those trees. There were not any buildings at the top of the right canyon. I wonder if that was where they used to go for special outdoor ceremonies. At least that’s what I imagined. My mind just wandered, making up little stories of those who used to live here… It was a lovely way to spend the evening as I watched the sun begin to set.